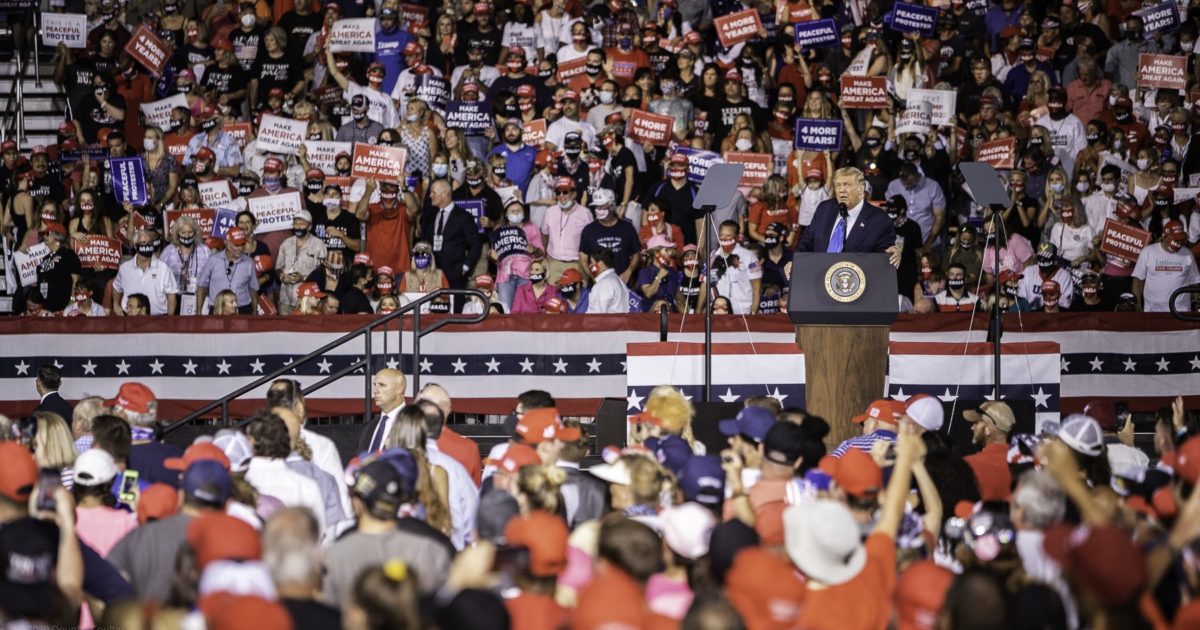 “Did you see [Biden] did a lid this morning again?” Trump told supporters during his campaign rally Thursday night at Cecil Airport hanger in Jacksonville, Fla. “A lid is when you put out word you’re not going to be campaigning today. So he does a lid all the time. I’m working my ass off. I’m in Texas. I’m in Ohio. I’m in North Carolina, South Carolina. I’m in Michigan. I’m all over the place.”

“But a lid is you know you’re not gonna go out today, you’re gonna stay in your apartment or let’s put it this way in his basement,” Trump continued. “So early in the morning he’s put a lid on that means nothing for today. I guess they do that for the press, the fake news goes home and they say how great he is as a candidate.”

He assailed Biden for being a “low energy individual,” and reminding voters that a person with that type of energy who doesn’t “work hard” can’t be president.

Trump said he believes that Biden “will do fine” at the presidential debate next Tuesday because his team will give him a “shot of something.”

“Maybe [Biden] is gonna be great at the debate. You know he’s been doing it for 47 years,” Trump said. “Somebody said ‘oh he won’t do well in the debate,’ I said ‘I think you’re wrong he’ll do fine, he’s gonna do fine.’ They’ll give him a big shot or something and he’ll go out there, he will have a lot of energy, he’ll have energy and he’ll be like Superman for about 15 minutes.”

With just 40 days until the presidential election, the Biden campaign called the lid shortly after 9 a.m Thursday. A lid means no events, travel, and public statements from the candidate for reporters to cover and report on for the rest of the day. Biden running mate, Sen. Kamala Harris (D-CA) was also off the campaign trail and had no public events scheduled for the day.

Biden campaign spokesman Andrew Bates attacked reporters for focusing mostly on the campaign lid, saying the voters don’t care about this issue compared to the media.

Hello to the introspection-allergic and chronically wrong tiny percent of America who have proudly chosen to learn nothing from this election cycle in the name of ease, clicks, and above all, luxurious self absorption. https://t.co/2KAGvbtS4w

Meanwhile, Trump had a jammed-packed Thursday schedule of a mix of White House and campaign events. The president began the morning paying his respects to Justice Ruth Bader Ginsburg at the Supreme Court before heading to Charlotte, North Carolina in the afternoon to deliver remarks and sign an executive order on his “America First Healthcare Vision” healthcare plan. He capped the night at his final event traveling to Jacksonville for his campaign rally.

Floridian Press has tracked Biden’s campaign schedule and found so far 9 lid calls from the Biden campaign in the early morning hours for the month of September, informing all reporters that the Democratic nominee will be spending the rest of the day hunkered down in the basement from his Wilmington home.

Earlier, Trump blasted Biden on twitter as a “very low energy individual” who “wants to rest” after reporters widely lambast the Democratic nominee for hardly having any appearances so close to an election.

Sleepy Joe Biden just closed down his campaign for the day (Again). Wants to rest! He is a very LOW ENERGY INDIVIDUAL, and our Country cannot make it in these exciting, but complex and competitive times, with a Low Energy President !!!