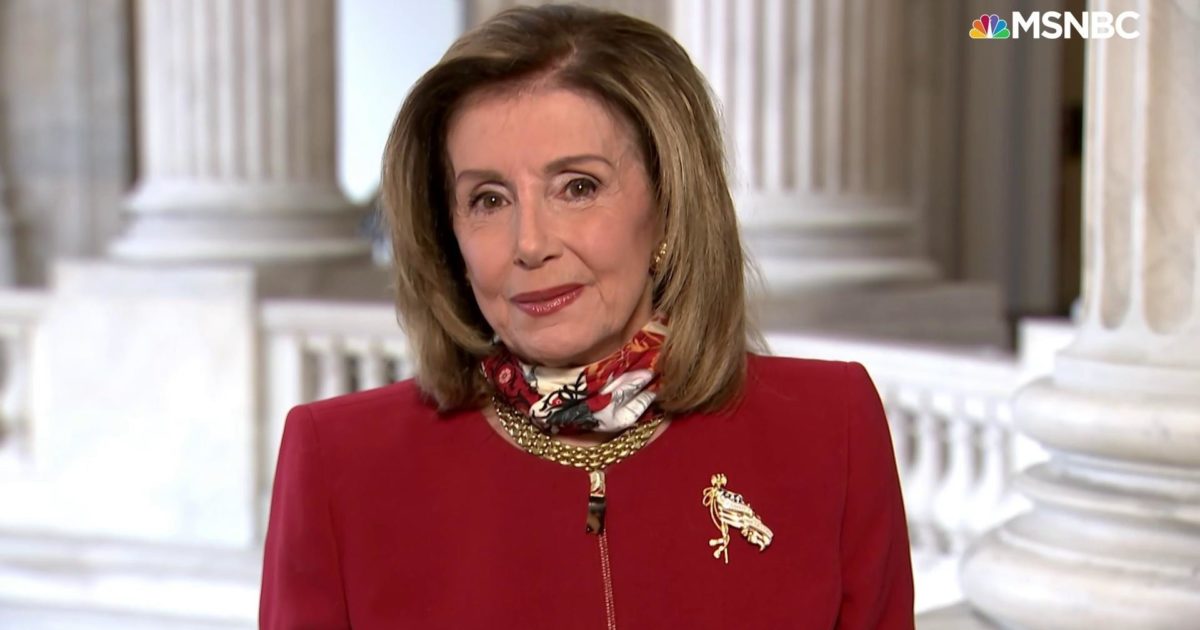 In an interview with MSNBC host Andrea Mitchell, Pelosi sounded the alarm that foreign governments might have “leverage” on the president due to the upcoming millions of dollars of loan debts.

“This President appears to have over $400 million in debt, $420 million, whatever it is, million dollars in debt.  To whom?  Different countries?  What is the leverage they have? So, for me, this is a national security question,” Pelosi said. “And in addition to which, it’s so strange that in 2017 the President paid $750 in federal taxes, and he paid over $300,000 in taxes to other countries that we know of.  It may be more.”

The New York Times on Sunday obtained more than two decades of Trump’s tax returns and reported that the President allegedly paid $750 in federal income taxes in both 2016 and 2017. It also found that Trump was able to leverage business losses as a way to avoid paying taxes and has several sizable loans upcoming in the next few years.

Pelosi without providing any evidence specifically pointed to Russia, arguing the President being favorable to Russia President Putin and insinuated that Trump may be indebted to Russia.

“The question is what does Putin have on the president politically, personally, financially in every way that the president would try to undermine our commitment to NATO, give away the store to Russia and Syria, try to cast blame on Ukraine for interfering in our elections when he knows full well with the consensus from the intelligence community that it is Russia,” Pelosi said. “The list goes on and on. The annexation in the Crimea, and the rest of that that the president just turns away from. So, he says he likes Putin and Putin likes him. Well, what’s the connection? We’ll see.”

“We take an oath to protect and defend.  This President is the Commander-in-Chief.  He has exposure to the tune of hundreds of millions of dollars, to whom?  The public has a right to know,” Pelosi added.

The Times’ report found no new connections to Russia, but cited the president had earned some money from foreign sources.

“750? It’s a disdain for America’s working families. It’s not right,” Pelosi said. “It’s not right, but our responsibility is to protect and defend, and we have to make sure we know what exposure the President of the United States has and what an impact it has on national security decisions for our country.”

Trump called the report “totally fake news” following the release during a press briefing on Sunday.

The Fake News Media, just like Election time 2016, is bringing up my Taxes & all sorts of other nonsense with illegally obtained information & only bad intent. I paid many millions of dollars in taxes but was entitled, like everyone else, to depreciation & tax credits…..

…..Financial Statements, from the time I announced I was going to run for President, showing all properties, assets and debts. It is a very IMPRESSIVE Statement, and also shows that I am the only President on record to give up my yearly $400,000 plus Presidential Salary!