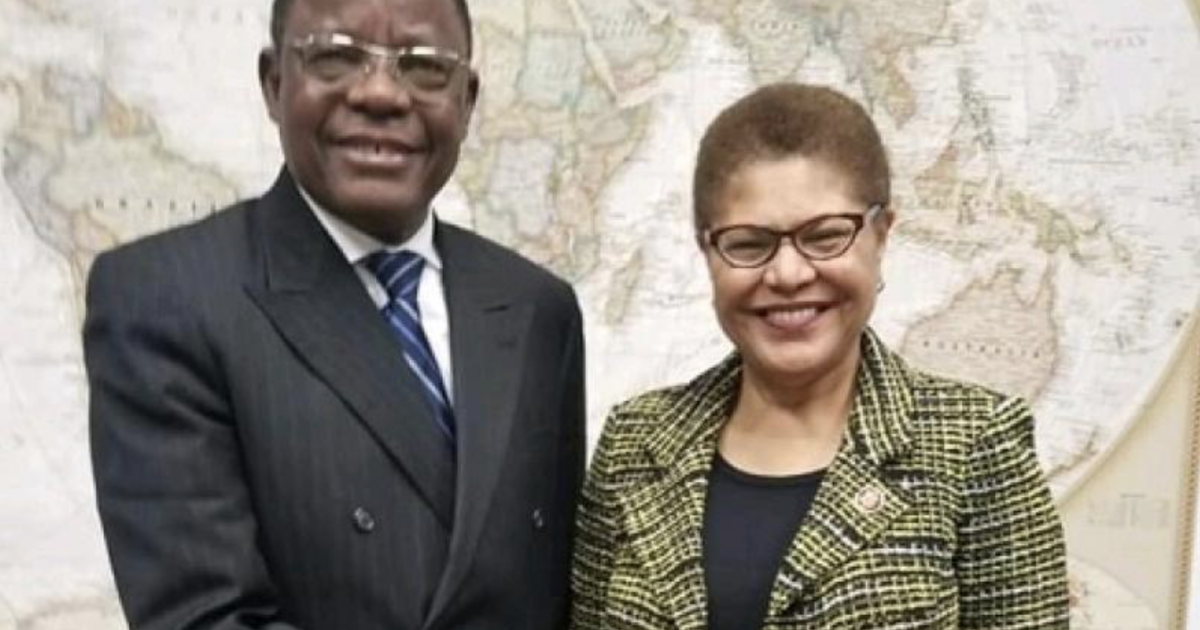 It took only two months. That’s the amount of time that elapsed from when Maurice Kamto, an African opposition leader who had been serving time, was released from prison and when he flew to the United States to meet with Democrats in positions of power at the State Department and the House of Representatives.

Democrats have long practiced the kind of moral relativism that sanctions arguments like, “One man’s terrorist is another man’s freedom fighter.” It’s why they show no hesitation in being photographed with people like Kamto, whose movement has supported the on-going violence in the Northwest and Southwest regions of Cameroon.

What does that violence look like? Beheadings. Killings. The clubbing of teachers. The closing of schools for years on end, because security conditions make it impossible for parents to trust that their children will be safe attending those schools.

And this is who the Democrats support? Apparently Representative Karen Bass and Assistant Secretary of State Tibor Nagy think so. They took high-level, on-the-books meetings with Kamto recently, and they posted about it publicly on Facebook and elsewhere. It isn’t enough, after all, to govern with moral relativism. You have to advertise it, too.

Kamto would argue that he is an opposition fighter, a leader taking on the cause of human rights and freedom in his own country. Except that his record shows no such thing. Even though he lost in legitimate elections—with results the US blessed—he has discredited them and called them rigged. He’s called for a boycott on upcoming municipal and legislative elections, even though the government is doing more than ever to ensure fair and free voting.

What has the opposition movement accomplished? All it seems to have left in its wake is support for violence and chaos in Cameroon’s northwest and southwest regions. It’s gotten so bad—and the opposition’s public case so weak—that the civilians Kamto claims to speak for have recently been forced to attack five separatist camps themselves.

Thankfully, the Cameroonian government has recently made some admirable moves that have done far more than Kamto and his allies have to advance the cause of liberty and unity in their country. For Democrats, of course, it isn’t enough, and it won’t be enough until leaders like Kamto sit atop perches of power.

The democratically-elected government of Cameroon is a US ally fighting Boko Haram and trying to stabilize a difficult situation. In the fact of that, Democrats are supporting someone who is a self-evident threat to democracy and to the cause of freedom in Cameroon.

Let’s call Kamto and his supporters and their behavior what it is: anti-democratic politics of the worst kind, masquerading as a fight for freedom. They cloak their own self-interest in the guise of fighting for a desperate and impoverished people. But their fight achieves the opposite, and they hope no one notices that their rhetoric does not match reality.

The Democrats, of course, love this sort of show. They embrace these leaders warmly, and they pretend that they are the great hope of peace-loving people everywhere. They take meetings with them. They pose for photos with them. And then, when those same leaders turn around and call for boycotts of legitimate elections, the Democrats find a way to blame it on what they argue are repressive governments.

Over time, relativism becomes a tough sell. Eventually, the wheels come off the wagon. As years of violence continue, people see a government–like Cameroon’s or Israel’s–doing the right thing in the face of a hard reality. And then, those same sensible people see a stark choice: support the government, doing its best; or side with anti-democratic showmen, planning the worst.

Democrats do not have to go down this road. Kamto won a grand total of 14 percent of the vote in the last election held in Cameroon, and his support is slipping as the government takes vital steps toward peace. If they do persist in supporting someone so fond of continuing a fight rather than trying to achieve peace, however, then Republicans need to stand up and call Kamto and his Democratic allies out. They need to become the party and champions of peace, and stand behind good people trying to do the best they can, even as weak-kneed Democrats try to undermine their efforts.