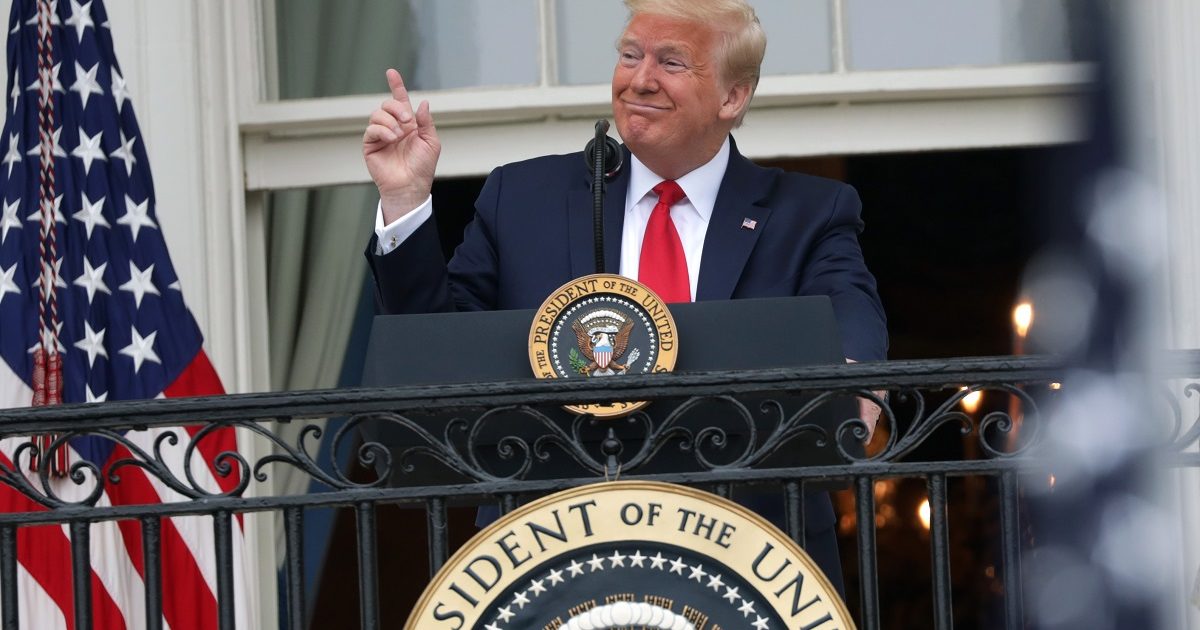 President Trump threatened to intervene and “solve it fast” the violent protest in New York City, criticizing Mayor Bill de Blasio for resisting calling in the National Guard, saying the “liberal mayor” is having a “lot of trouble” to quell the widespread rioting that have occurred over the last few nights.

“The National Guard can solve that problem in New York. And in fact, if they don’t get their act straightened out I will solve it. I’ll solve it fast,” Trump said in an interview with Brian Kilmeade on Fox News Radio. “You have a liberal mayor in Minneapolis that frankly was having was having a lot of trouble and you have a liberal mayor in New York City too and you notice that all of these places that have problems are not run by Republicans, they are run by liberal Democrats, so there is something into that philosophy.”

The president has turned up the pressure on New York officials in the last few days to call up for additional help in activating the National Guard to crackdown the ongoing violent demonstrations that have devolved into a rash of break-ins in business across the city while viciously attacking NYPD officers.

Trump argued how he mobilized military personnel in both Minnesota and Washington D.C. on Monday night that was plagued with riots and violence. He pointed out that once the National Guard was activated in the Nation’s Capitol and Minneapolis, it was an effective “dominant force” in restoring order.

“You look at what happened in Minnesota, they were getting decimated and then after three days of watching it I demanded that the National Guard be utilized and in one day it was over. You saw the police were running in Minneapolis and they were running away from their precinct, which is something I have never seen before,” Trump said. “Washington is in great shape. We called out the National Guard after the first night, which was a little bit rougher, but then after that we called up and we have had no problem at all last night.”

“We had no problem at all last night,” Trump added. “Maybe it doesn’t sound good to say it, but you have to have a dominant force. You need law and order.”

De Blasio has rejected bring in the National Guard in the city to help the NYPD with the violent riots, saying “no good comes of” armed forces and they aren’t trained to help police handle the ongoing violent unrest and looting.

Trump lashed out at New York Governor Andrew Cuomo on Tuesday in a series of tweets for “refuses to accept my offer of a dominating National Guard,” telling the New York official to “act fast” and referenced his “horrible and deadly mistake” in the handling of nursing homes during the coronavirus pandemic.

In another tweet late Tuesday evening, Trump cited how New York City is “totally out of control” because the NYPD officer were “not being allowed to perform their MAGIC” and needed additional help. This tweet came after NYPD Sergeants Benevolent Association (SBA) President in an interview on Fox News’ The Ingraham Angle personally pleaded for President Trump to “immediately send federal personnel” to New York City since Cuomo won’t implement the National Guard.

“NYPD is losing the city of New York and we have no leadership in the city of New York right now, from City Hall to the brass of the NYPD,”  SBA President Ed Mullins told Laura Ingraham. “The men and women are being pelted with rocks, bricks, cars are lit on fire. And this is continuous. President Trump is watching it. I am asking the president to please, please immediately send federal personnel to New York City and monitor what is going on. If Governor Cuomo does not implement the National Guard immediately, then the federal government is going to have to step in.”