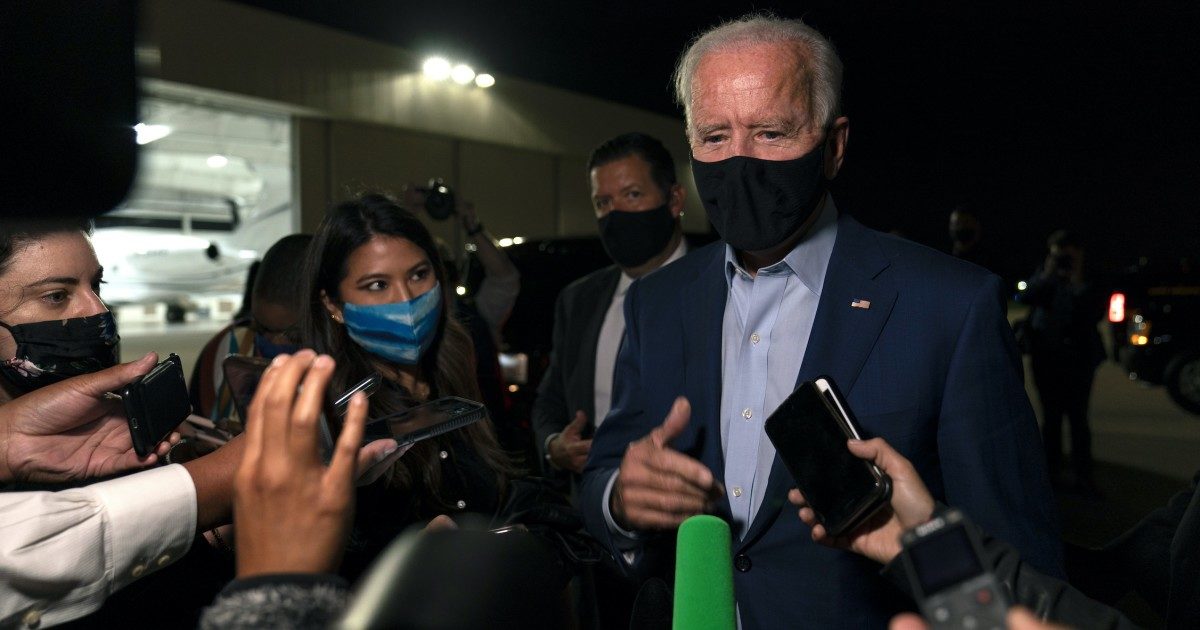 When landed in Wilmington, Delaware Wednesday night after campaigning in North Carolina, Biden was asked about the president’s earlier remarks from his White House briefing.

He added, “Look, he says the most irrational things. I don’t know what to say.”

At the White House coronavirus press briefing Wednesday after, Trump sidestep a question when asked “win, lose or draw” would he “commit here today for a peaceful transfer of all power after the election.”

“We’re going to have to see what happens, you know, but I’ve been complaining very strongly about the ballots. The ballots are a disaster,” Trump responded.

When pressed by the Playboy reporter to “commit” citing the “rioting in many cities across this country,” Trump suggested if states got “rid of” unsolicited mail-in ballots then there would be no concern regarding a “very peaceful” transfers of power.

The Biden’s campaign responded to Trump’s remark, saying the U.S. is “perfectly capable of escorting trespassers out of the White House.”

“The American people will decide this election. And the United States government is perfectly capable of escorting trespassers out of the White House,” the campaign statement said.

The Trump campaign pushed back on criticism of the president’s response from the Biden campaign.

“The premise of the question the president was asked assumed that he would lose, which he naturally disagrees with, meaning there will not be a change in administration,” Trump Campaign spokesman Tim Murtaugh said.

Congressional Republicans also pushed back on Thursday and assured there will be a “peaceful transfer of power.”

Senate Majority Leader Mitch McConnell (R-KY) insisted that Republicans are not rejecting the importance of a peaceful transfer of power.

The winner of the November 3rd election will be inaugurated on January 20th. There will be an orderly transition just as there has been every four years since 1792.

Sen. Lindsey Graham (R-SC) a staunch defender of Trump, said there will be a peaceful transition but having a full Supreme Court is key to that.

“People wonder about the peaceful transfer of power. I can assure you, it will be peaceful,” Graham said on ‘Fox & Friends.’ “Now, we may have litigation about who won the election, but the court will decide and if the Republicans lose, we will accept that result. But we need a full-court. If the Supreme Court rules in favor of Joe Biden, I will accept that result.”

Democrats on the other hand have used Trump’s response to accuse him of being a dictator.

“We know who he admires. Putin. Kim Jong-un, Erdogan,” Pelosi told reporters. “You are not in Russia. He is not in North Korea. He is not in Turkey. He’s trying to have the Constitution of the United States swallow Clorox.”

Senate Minority Leader Chuck Schumer (D-NY) on Wednesday told CNN that Trump “is not a dictator, and the American people will not allow him to be one.”

“The American people are wedded to democracy,” Schumer said on CNN’s Outfront. “We believe in democracy, and the kind of thing Trump is talking about just will not happen. One way or another, there’ll be a peaceful transition of power, and President Trump will not get his wish.”

On the Senate floor Thursday morning, Schumer continued on his rant, claiming Trump is the “gravest threat to American democracy right now” by trying to “stay in power for whatever illicit way he chooses to do so.”

He cited an Atlantic report that said Republicans were looking to possibly ignore Election Day results and send “loyal electors” to vote for Trump in battleground states.

“President Trump you are not a dictator and America will not permit you to be one,” Schumer said. “The most innocent interpretation of the president’s comments is he’s just trying to get people not to vote. It doesn’t matter how corrosive it is to our democracy, the president doesn’t care. It’s his own ego and nothing else. The president says it if he thinks it’ll help him win. And that’s the most innocent interpretation.”

The Senate passed a resolution Thursday afternoon from Sen. Joe Manchin (D-WV) reaffirming the chamber’s “commitment to the orderly and peaceful transfer of power called for in the Constitution of the United States.”