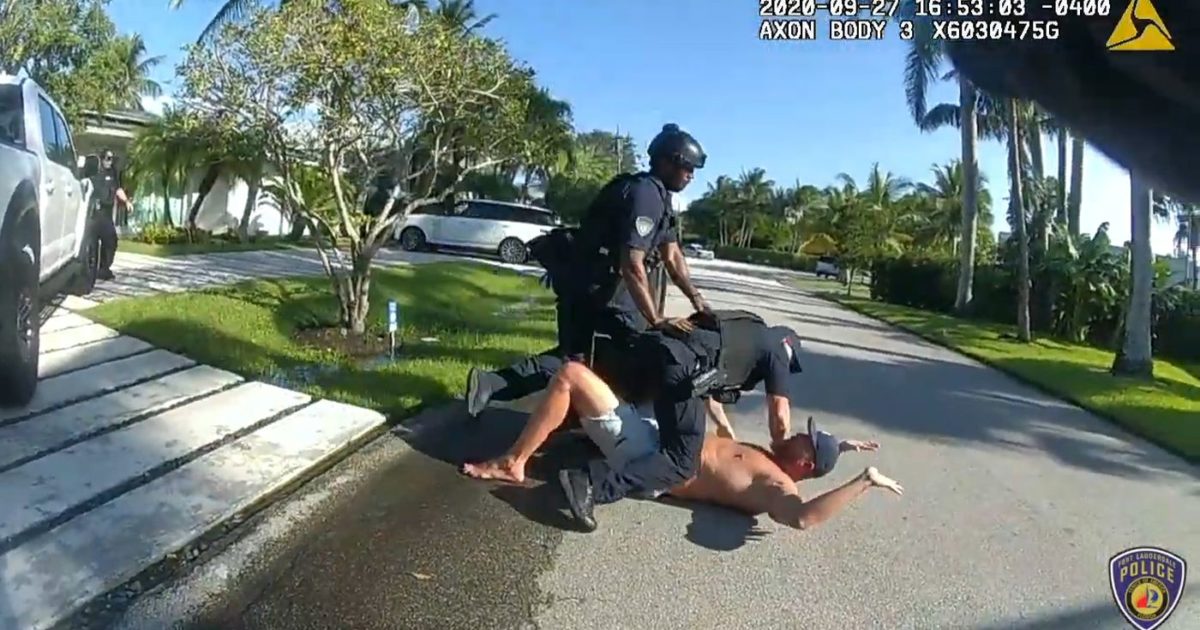 Police bodycam footage of Trump 2020 campaign Advisor Brad Parscale’s arrest was released on Monday showing officers bodyslamming Parscale once he emerged outside his home shirtless with a beer in his hand during a tense scene after his wife told the police that he was suicidal.

“Listen, I’m not trying to kill myself. She’s lying, I didn’t do anything!” Parscale is heard telling the officers in his driveway before an officer tackles the 6-foot-8 advisor to the ground and handcuffed after ignoring their five demands to “get on the ground.”

Fort Lauderdale police on Monday released body camera footage, a 911 call, and records detailing the events that unfolded. According to the police report, officers were called to Parscale home shortly after 3:30 pm Sunday when a neighbor saw Parscale wife, Candice fleeing the house, and was apparently shaken. The neighbor called 911, and it was heard that Candice saying she thinks her husband fired his pistol and possibly shot himself inside their home.

“He, he is under a lot of stress right now, and he is pissed at the world and so he like walked out, cocked the handgun, ranting and raving about something, I don’t know what,” Candice is heard telling the 911 dispatcher. “So I was like, OK, just chill. Stop. And then I got nervous and I went and I was sitting in the front yard, thinking, something is not right. And I saw him looking out the front window and I heard a loud, a loud noise. I heard a loud boom. Ten minutes ago.”

As many as 20 police cars and boats descended to Parscale $2.4 million home in Seven Isles.

In the police report, Parscale was barricaded in his home and initially refused to come outside. The standoff lasted about an hour between the Pascale and the police. One officer who personally knows the advisor and considers Pascale a friend was able to convince him to step out of his house to defuse the situation. Parscale finally obliged and was walking to his driveway where then officers ordered the belligerent advisor to get on the ground. 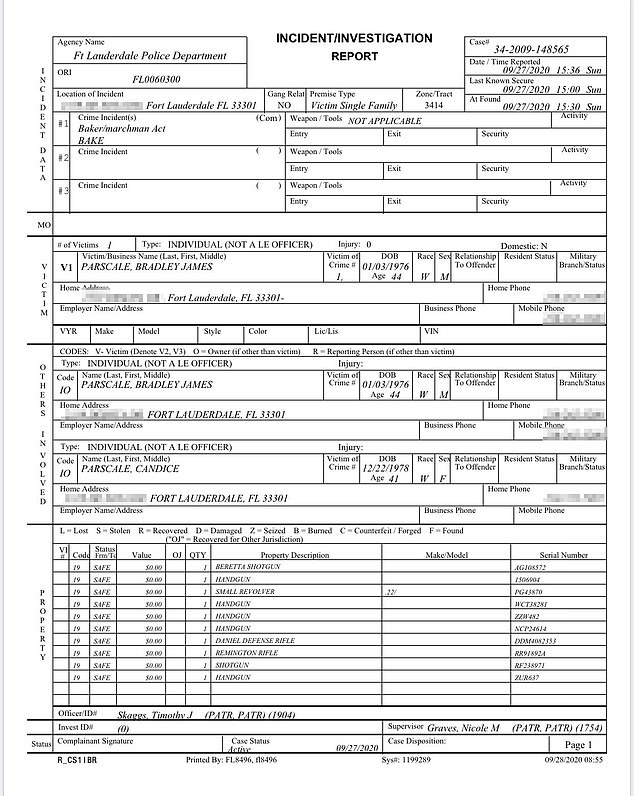 Parscale who was shirtless and holding a beer didn’t comply with the police order, leading to one to use a “double-leg takedown” to knock him to the ground as another officer was seen handcuffing the advisor. The one officer who bodyslammed Parscale reassured him that they “will figure it all out.”

“Hey bud. Hey, we’ll figure it all out, don’t worry about it, We’re going to get you off the ground in just a second,” officers are heard in the video telling Parscale, as well as a few reassuring words.

Officers mentioned in their reports that Parscale’s wife told them that the Trump advisor is “suffering from post-traumatic stress disorder” and had become violent in recent weeks. Candice Parscale showed officer bruises on her arms from an altercation after an argument the couple had a few days ago. The police took photos of her injuries as evidence.

She told the officers that her husband didn’t put his hand on her Sunday, but feared that he would kill himself after hearing talks about such incident in the last few weeks.

Parscale was taken to a local hospital for involuntarily committed for psychiatric evaluation under Florida’s Baker Act, a law that allows police to detain anyone who may pose a threat to themselves or others at a mental health facility for up to 72 hours.

10 guns were recovered from his home including several pistols a shotgun as well as a rifle and were confiscated.

Trump campaign spokesman Tim Murtaugh in a statement said “our thoughts are with Brad and his family as we wait for all the facts to emerge.”

“Brad Parscale is a member of our family and we all love him. We are ready to support him and his family in any way possible. The disgusting, personal attacks from Democrats and disgruntled RINOs have gone too far, and they should be ashamed of themselves for what they’ve done to this man and his family,” the statement reads.

The Biden campaign’s in a tweet responded with solace for Parscale, saying “This field is tough. It takes its toll on people in unfathomable ways. Regardless of the differences we have in our beliefs, we at the Biden War Room hope that Brad Parscale is safe, is with his family, and gets everything that he needs to get better.”

This field is tough. It takes its toll on people in unfathomable ways. Regardless of the differences we have in our beliefs, we at the Biden War Room hope that Brad Parscale is safe, is with his family, and gets everything that he needs to get better.

Police have not charged Parscale with any crimes.